Statistics is the science of designing experiments, collecting data, analyzing data, and learning from data for the purpose of decision-making and scientific discoveries. In other words, statistics is the science of learning from data. Statistics analysis methods include various tools and analytical techniques in order to deal with the massive extent of data for making inferences about the population, from the, picked out sample data that can be used by researchers to solve their problems.

Standard deviation is the degree of dispersion or the scatter of the data points relative to its mean, in descriptive statistics. It tells how the values are spread across the data sample and it is the measure of the variation of the data points from the mean. The standard deviation of a sample, statistical population, random variable, data set, or probability distribution is the square root of its variance. 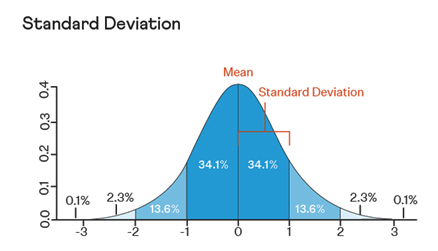 The formula to calculate standard deviation:

N = the size of the population

xi = each value from the population

The formula to calculate regression:

Hypothesis testing is used to assess the plausibility of a hypothesis by using sample data.

The test provides evidence concerning the plausibility of the hypothesis, given the data.

Statistical analysts test a hypothesis by measuring and examining a random sample of the population being analyzed. Steps of Hypothesis Testing: (a) The first step is for the analyst to state the two hypotheses so that only one can be right, (b) The next step is to formulate an analysis plan, which outlines how the data will be evaluated, (c) the third step is to carry out the plan and physically analyze the sample data, and (d) the fourth and final step is to analyze the results and either reject the null hypothesis, or state that the null hypothesis is plausible, given the data.